Finally!  Three and a half years after our family left India – we spent a year living in Bangalore back in 2008-09 – we returned to India and our first stop is Mumbai. Although I have visited India four times since then, this is the first time that Pam and the kids have been able to make the trip.  I think it’s really important to cement those old memories of life in Bangalore, and travels in India, with another visit now that they are older.  We’ll be in Bangalore next week, but for now, we finally get to see the sprawling city of Mumbai.

We visited Mumbai ever so briefly back in January 2009, but I only saw IIT and the others saw nothing but the airport.  This time, we are fortunate to be able to visit two local friends – Varsha, who is a CS professor at IIT Bombay, and Kirti, who recently graduated from the Dartmouth MEM program and who was our FFP student last year.

We arrived at the Trident hotel around 2am yesterday, after a 25-hour journey from home. We slept a few hours and awoke to find out just how spectacular a location we have selected.  We are located right on the edge of the bay, along the famous Marine Drive promenade, with a spectacular view across the bay.  Unfortunately, the view is hampered by persistent smog, this time of year.

We spent our first day wandering the streets in the area.  For a weekday, I was surprised at how few people and how little traffic there is in South Bombay!  I’m used to the chaos of Bangalore streets but here they are wider, less congested, and better organized. We found a movie theater two blocks from our hotel, and decided to watch Life of Pi (in 3D) later in the afternoon.  (See it! great movie.)

Today we hired a driver and went up to the northern suburbs for breakfast with the family of Varsha and Jitendre, two colleagues from my days as a grad student at Duke. They took us over to IIT Bombay, which is in the midst of a four-day arts festival and competition.  We enjoyed the display of sculptures, watched contestants in the classical dance competition, and watched some of the Bollywood dance competition.  fun!

We then went to visit Kirti and her family for a home-cooked lunch. Wow, what a treat! chicken curry and fried fish, out of this world.

On the way back we shopped at FabIndia, stopped to see the Haji Ali Durgah and to eat some wonderful fruit creams – that is, chopped fruits covered with a cold sweet cream sauce, a bit like half-melted ice cream.

Today was a long day – we were out for 11 hours, and we’re too stuffed to go out for dinner. We flipped on the TV to watch the England vs. India cricket match, happening live at the stadium just a few blocks down the street.

So much for the tedious chronological summary.  Impressions so far?  It seems a wonderful city with great people and a deep history.  South Bombay is full of grand buildings from the Victorian era. The infrastructure, though clearly not keeping up with the booming population, has done so far better than Bangalore and thus the traffic moves along and things seem to work smoothly.  I look forward to exploring more tomorrow. 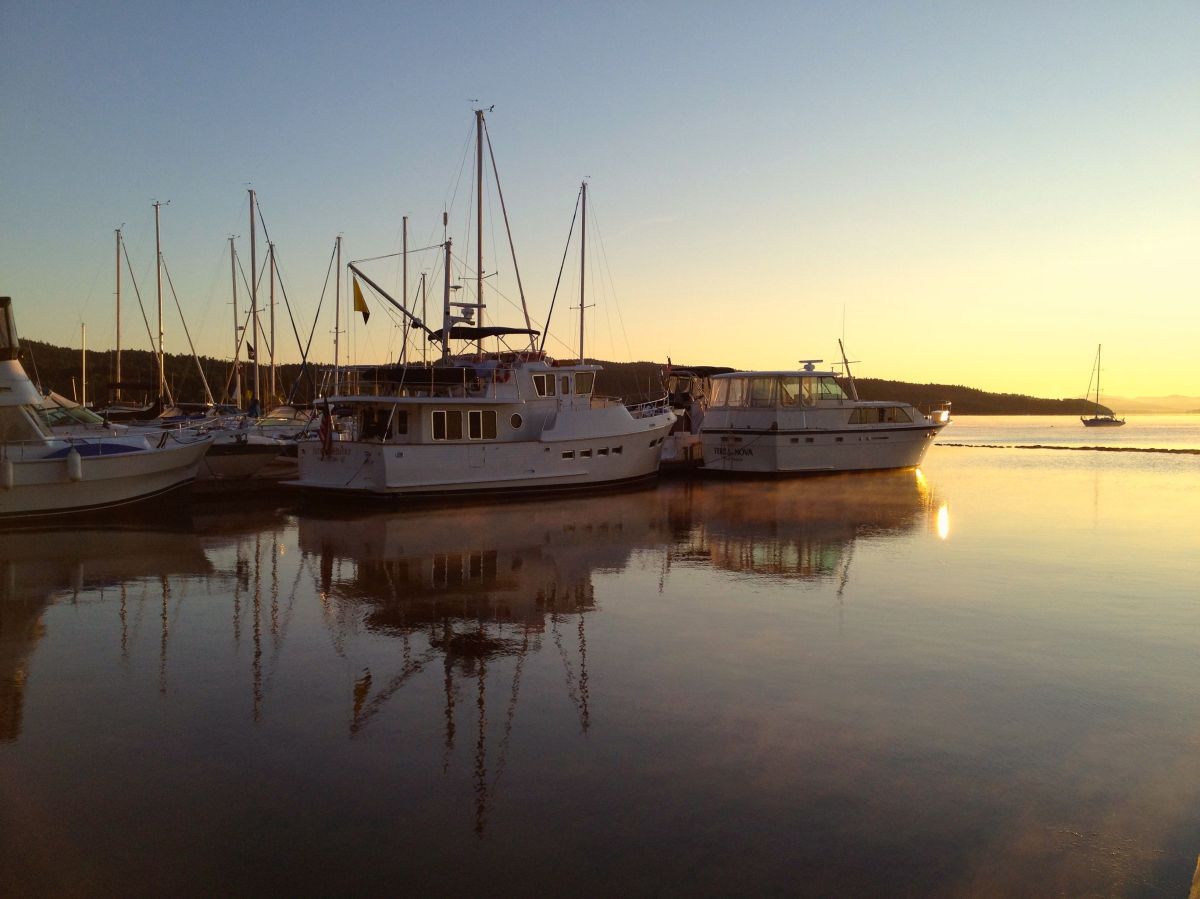 We spent the weekend of August 17-19 picking up the kids at Camp Dudley – Mara from Camp Dudley at Kiniya in Colchester VT, then John and Andy from Camp Dudley in Westport NY, on opposite sides of Lake Champlain.  Though the weather was a bit threatening on Friday afternoon, the rest of the weekend was gloriously beautiful and we had a great time.  You can see photos of the kids at Dudley here, and photos from the weekend here.

I write mostly to share a couple of photos of the Lake, a sunset view from Kiniya and a sunrise view from Westport. 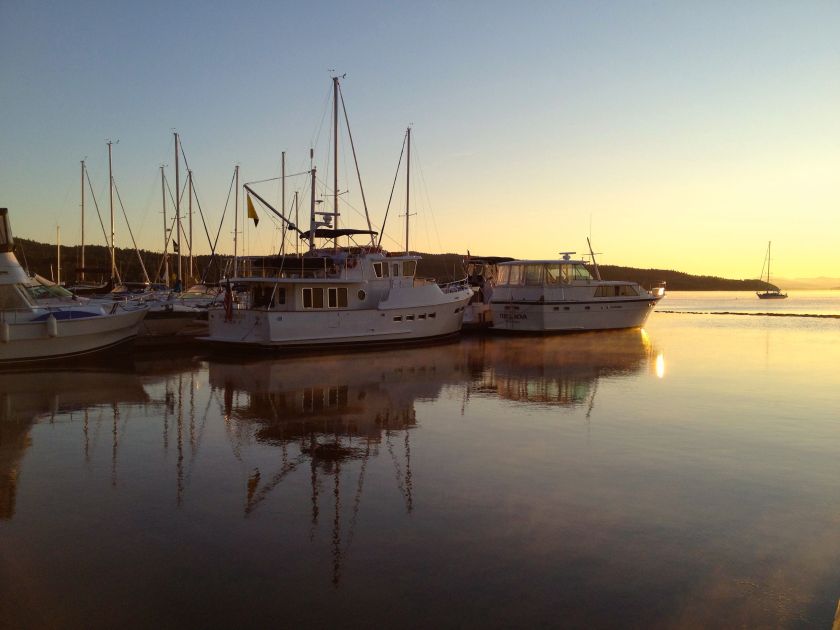 I usually get to altitude by climbing mountains, but yesterday I had the incredible opportunity to fly around the Seattle area with my former student Jon Howell

, who now has his pilot’s license and loves to fly. After crawling through Bellevue rush hour we arrived at the Renton airport and went through pre-flight checks on the little Cessna Skyhawk II. The plan was to fly up to Friday Harbor in the San Juan islands, for dinner, but the clouds meant he would need to fly IFR (instrument) rather than VFR (visual) rules. Jon is qualified for IFR but there one of the lights was out and there were reports of something flaky in one radio… discretion being the better part of valor, we instead took a VFR spin around Seattle under the cloud deck, cruising at 1500′. Quite exciting! Nice views of the city and lakes and sound. We even flew right over SeaTac airport while jetliners landed below us. Wow. Check out the photo gallery.

And for dessert, we picked big juicy blackberries along the access road.

Every year I attend the MobiSys conference; this year it was held in the beautiful Lake District of northwestern England.  I had heard so much about this area – a walker’s paradise, people said – so I decided to go early and to bring along my son John.  We flew from Manchester to Manchester (NH to UK, that is) and drove to Ambleside, in the center of the Lake District.  It was pouring rain, but the rental-car agent assured us that it wouldn’t last (more on that later). END_OF_DOCUMENT_TOKEN_TO_BE_REPLACED

With the demise of MobileMe hosting of iWeb sites, I decided to give WordPress a try.  I’m sitting here with my son in the Philadelphia airport just about to head out on our latest adventure: 10 days in the Lakes District of western England, including a visit to my home town – literally, my birthplace, near Manchester.

A quick invention made for easier travel.

We travel a lot with our kids.  Every trip seems to require at least one layover in a large airport, requiring us to lug three kids, 1-3 car seats, a diaper bag, and a few other carry-on bags from one gate to another.  Whew! that’s a lot to carry.

So I decided to convert the carseats into “back-packs”, so that I could carry the seats hands-free.  I often stuff some of the smaller carry-on bags, coats, sweaters, etc, into one of the seats.  It’s so much more comfortable than lugging them around in my arms!

One drawback is that you have to be really careful when you turn around, lest you bop somebody on the head with the carseat.

I ordered a simple set of back-pack straps from Campmor.  I spent about $30 per seat and got some nice straps, but you could probably find nearly the same thing at any outdoor gear store, or probably places like KMart, probably for less money.  You don’t need anything fancy: just a pair of straps, four sets of clevis pins with split rings, and probably a few washers.  (The pins and rings attach the pack straps to the seat.)  I was lucky to find holes in the seats in just the right places; I needed to add a few washers to strengthen the connection.  I suppose it wouldn’t hurt to drill a hole, if necessary, but I can imagine a seat manufacturer claiming that voided the warranty.

I would never use this rig to carry my kid on my back.  The parts of the seat to which I attach were not designed for that sort of stress, so the pins might pull right through.  Also, as you can see in the photo, the system depends on the shear stress of the ring, unlike in most back-pack systems that depend on the shear stress of the pin.  So I’d be afraid of the pin pulling through the plastic hole on the seat, or the ring shearing through, if there were a lot of weight.  If I’m just carrying a diaper bag, and it fails, so what… but if I’m carrying a kid, and it fails, I’m in big trouble.

I doubt it would be good for long distances, unless you added some padding along the back.

It’s not really a back-pack in the sense that I can carry big loads.  I guess it’s a car seat you can carry on your back.