A lovely late-fall stroll along the ridgeline with views down into Zurich.

As we the final leaves fall from the trees in Zürich – and the higher-elevation ski resorts start to open around Switzerland – the options for hiking become narrower.  I’ve had my eyes on one hike ever since my first day in town: Uteliberg.  This hill dominates the opposite side of the lake, above Zürich, and we watch the sun set over Uetliberg from our flat every evening. With a summit-top observation tower, a telecom tower, a hotel, and a restaurant, it glows prominently in our nighttime view behind the city.  Read on, and check out the photo gallery.

It’s not high (barely 800m), but there are reportedly several nice trails that ascend from the edge of the city up through the forest to the summit.  Today, we took the S10 train from the city center and wound around the backside and up to the final station, close to the summit.  We had lunch in the station cafeteria – food was not bad, not great, but we’re getting used to spending $95 for three, even for cafeteria food.

Then we set out up the gravel path with dozens of other families out for a stroll on this pleasant Saturday afternoon.  There was intermittent sun, and a chill in the air, but overall a nice day.  We quickly discovered that the ridgeline path, used by hikers, bikers, and strollers, is also called Planetenweg, with proportionally-spaced markers indicating that we were passing Mercury, Venus, Earth, and beyond.  (Andy and I later made it nearly as far as Neptune and Pluto.)

The paved ‘summit’ is not far, and popular with selfie-taking tourists.  Unfortunately,  a low haze hung over the surrounding terrain so we did not see any of the alpine summits that would normally dazzle from this viewpoint.  But we managed to pick out our neighborhood as we surveyed the city and the lake below.

Pam returned on the train while Andy and I continued another 6km along the ridge, mostly strolling along a wide gravel/dirt pathway shared by walkers and bikers and the occasional farm vehicle. We had views to the west, across pastoral landscapes, and to the east, over Zürichsee to the city.  We passed several picnic areas, each of which had a grill and a table and (sometimes) a sheltered space to sit out of the wind or rain.   One well-bundled family was grilling bratwurst and enjoying a weekend picnic.

We left the trail at another bump called Felsenegg, where there is a cable car down to Adliswil.  We packed into the car with over 20 others for a (very) snug ride to this cute suburban town.  Andy’s school is located here, so he knew the territory; we hopped a bus and a tram back into the city.  I love this about hiking in Switzerland; you can start at one trailhead and end at another, confident of public transportation back home.

In the city center we stopped by a booth to buy some fresh Heiss Marroni, hot chestnuts, and then sat in an outdoor cafe, snug under their blankets and sheepskins, to enjoy some superb Swiss hot chocolate.  A fine way to end the day! 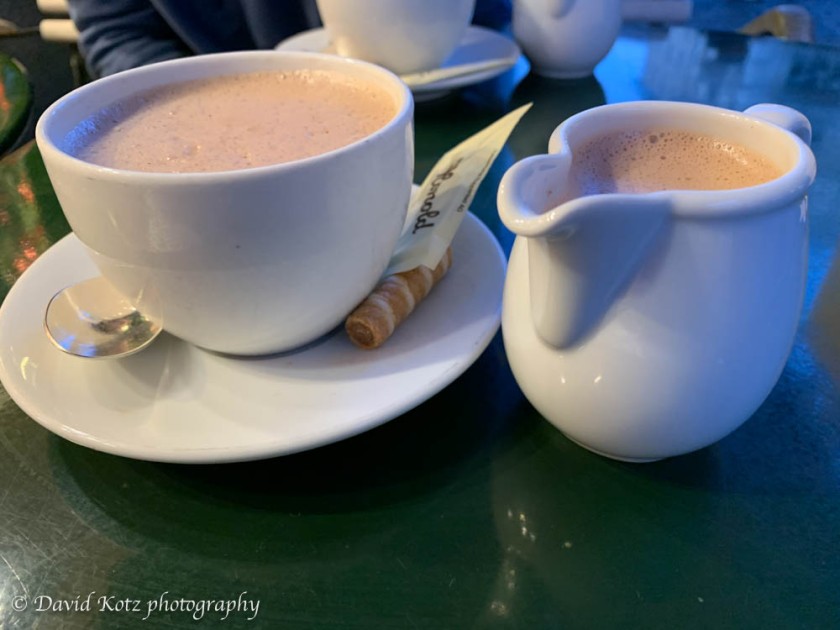 Read on, and check out the photo gallery.  If you want to keep up with our travels, please click the “Follow” button at right.

One thought on “Uetliberg”