A beautiful walk through forests and meadows on a clear spring day.

Okay: enough of the “street hiking” in Zürich.  It’s time to get back out on the trails and in the woods!  It rained the past three days, clearing the air of the haze that accumulated during the long March-April dry spell. Given a sunny forecast, a quiet Sunday morning, and an intriguing route, I hopped a (nearly) empty train to the outskirts of Zürich Canton. An hour later  I was walking past the church of the tiny village of Fischenthal, its bell tolling for a service that cannot be held, and then off the road onto a steep dirt track through a pasture.  Read on for the full story and more photos.

I passed a group of extremely friendly goats, who seemed they, too, were tired of social distancing and wanted me to join them for a day of grazing in their enclosure.  I passed a small boy running a weedwhacker, watched carefully by his mother, while his father ran a backhoe to rearrange the soil in their farmyard.  (Sunday morning?!)  I pushed through the turnstyles providing hikers a gap in the electric fencing, and entered an active cowpasture – a first for me in Switzerland, because my autumn hikes occurred after the cows had been brought down from their hilltop pastures – and carefully watched my step as I greeted its grazing residents – busy turning Swiss grass into Swiss cheese – on my way up to Hüttchopf.

As I arrived at the grassy “summit” of Hüttchopf, I encountered the biggest crowd of my day: four other hikers, resting on the summit benches and enjoying an early lunch.  A little girl cheerfully bounced up from between her parents to give me a hearty “Grüezi!!” greeting.  So happy.  So carefree.  So pleasant.  Yes, Grüezi to you, little girl!  I am glad to be here, too.

This little peak is, according to the route description, one of the high points of Zürich Canton at 1232m.  Its slightly-taller neighbor, Schnebelhorn, is the true high point of the Canton, and the destination of my blustery hike last November.  Hüttchopf is a lovely little bump, a grassy pyramid-shaped promontory with the corduroy meadows that characterize steep pastureland in this terrain, shaped for millennia by hoofed critters following the contours as they grazed.  This summit offers grand views of the snow-capped Glarus Alps to the south, of the villages of Fischenthal and Gibswil to the west-northwest, and a peek at Zürichsee (lake) to the southwest.  A few clouds clung to the Alpine summits, but it was nonetheless a refreshing view. 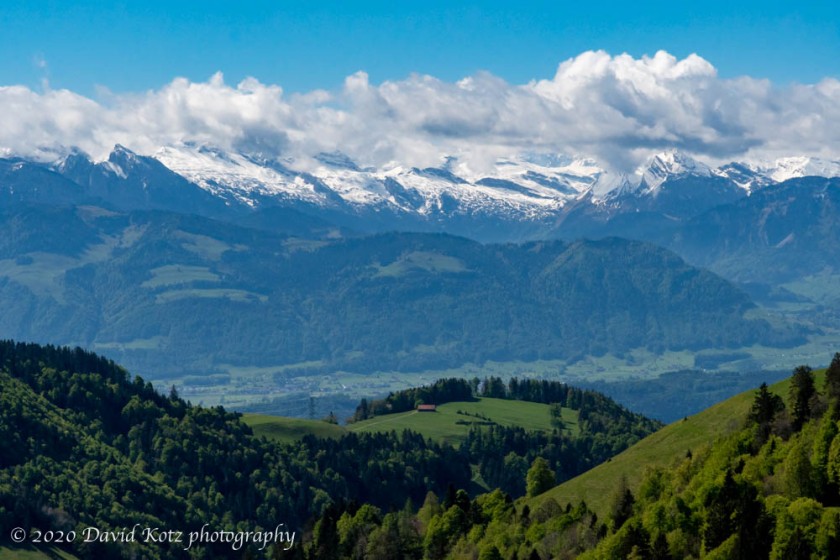 I reluctantly left the summit and headed down and around the next bump to Scheidegg, a farmhouse that doubles as an alpine bar and restaurant.  On a normal sunny Sunday, its balcony would be throbbing with contented hikers, soaking in the sunshine while sipping bier and supping on brats and rösti… but this is Corona season.  In ten days’ time, that might change (Switzerland is set to re-open restaurants on 11 May).

In the adjacent field, the local paragliding club was beginning to gather. As I enjoyed my lunch in the dandelion-and-buttercup meadow nearby, I watched as two dozen hearty hikers arrived, carrying overly large backpacks… which unfurled into paragliding chutes.  I didn’t stick around to watch them launch, but they later passed overhead as I approached the valley meadows.

My descent was steep and rapid, along forest trails and meadow paths, between farmhouses and barns, following the ubiquitous yellow Wanderweg signs.  Eventually I reached the valley floor and followed a delightful brook as it passed through old millraces and over some pretty waterfalls. 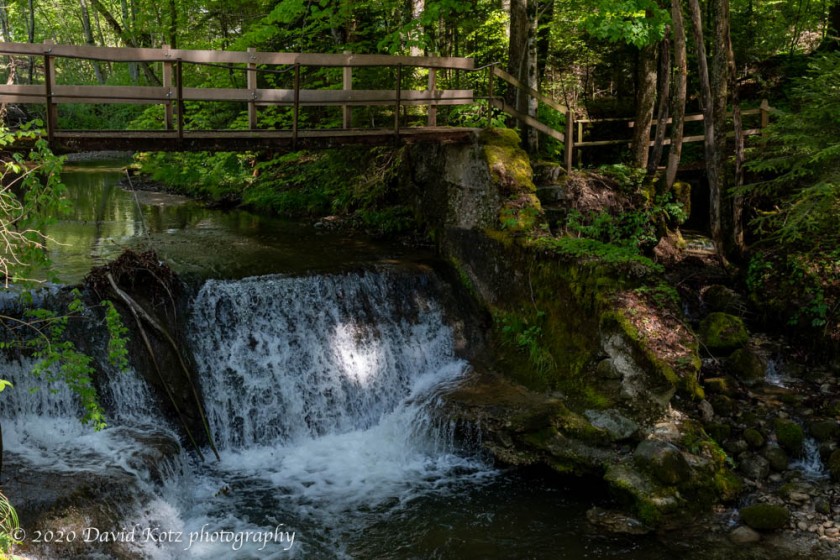 Finally, I entered the outskirts of the small town of Wald, strolling its pedestrian-friendly business district (empty on a Sunday morning) as I made my way to its Bahnhof (train/bus station).  I recognized it from when Andy and I arrived here after our Bachtel hike late last fall.  From here I was able to catch a bus and train homeward, paying for first class (six bucks extra) – which granted me essentially my own rail car for a private journey home.

Not a bad day indeed.

See the complete photo gallery.  If you want to keep up with my hikes and our other adventures, click “Follow” at upper right.