A gloriously beautiful overnight hike in the Bigelow Range of western Maine.

After a summer of hiking and the completion of my Adirondack 46, I still have an itch to get out hiking.  This weekend’s blue-sky weather beckoned, despite the unseasonably hot and muggy conditions (highs in the 70s and 80s in late September?), so I turned my attention to the Appalachian high peaks of Maine and headed for the Bigelow Range.  My campsite, in the col between its two major peaks, allowed me to enjoy sunset on the western peak and sunrise on the eastern peak, followed by a beautiful ridge walk. Read on, and check out the photo gallery.

Following a loop route suggested on the 4000footers website, I lugged my overnight pack up the steep Firewarden’s Trail on Saturday afternoon.  Concerned that my destination, the tentsites in Avery Col, might be a popular choice on this beautiful weekend, I left home early for the 4-hour drive across New Hampshire, past Dartmouth’s Second College Grant, and among the many lakes of Western Maine.  The trailhead parking had already overflowed when I arrived just before noon. After two and a half hours of steep and rocky climbing in weather that felt like the dog days of August, I reached the tentsite an was glad to feel a steady breeze blowing through the firs.  I was impressed by the well-maintained and well-organized site, with its five tent platforms, three water sources, privy, and caretaker’s cabin.  I was glad to be arriving early, with my pick of platforms, because the site did indeed fill later in the afternoon.

I still had over three hours still until sunset. I spent about an hour setting up camp, fetching water, and repacking my pack for the summit. I spent another hour walking up to Avery Peak (only 0.4mi) and reading a book in the late-afternoon sunshine. I descended back to camp for a hearty dinner, and then walked up to West Bigelow Peak (0.3mi) as the sun sank toward the distant horizon.

The cool thing about the Equinox is that the sun rises due east, and sets due west; I had arrived the day after Equinox. The cool thing about the Bigelow Range is that it runs east-west, and indeed, Avery Peak is due east of West Bigelow Peak.  I brought my big DLSR and a tripod with the aim of capturing some great sunset and sunrise photos, and decided it would be best to view the sunset from the western peak and sunrise from the eastern peak. I set up my iPhone on the summit signpost to capture a time-lapse movie.

There were almost no clouds, which usually means a disappointing sunset.  But there was a thick, humid haze, and that lent the setting sun a deep red color. From my vantage point on West Bigelow Peak, the sun set directly between the next two peaks west along the range, South and North Horn.  Neat!  I spent about half an hour photographing this spectacle, sharing the breezy end to the day with another hiker who’d had the same idea.

Overnight was clear and breezy.  Without its fly, my new Big Agnes tent is nearly all mesh – allowing a beautiful view of the starry sky.  Frequently, during the night, I’d peek at the stars while I awaited the dawn.

I rose at 5:30am – not the first in camp to do so – and headed back east to Avery Peak, pausing at a small spring along the trail to refill my water bottle.  I reached the peak, and the old foundation of a fire tower just beyond, to join three other groups eagerly awaiting the return of the sun: a father and his son, a cute Quebecois couple, and a middle-aged woman who had just completed her NE67 on this very peak. I set up my camera and pulled out my stove to make some tea and breakfast.  What a great way to begin the day! 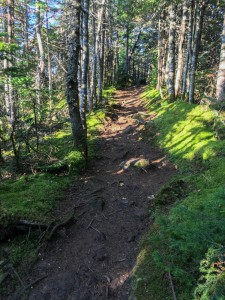 I scrambled back down to camp, packed up my gear, and hit the trail by 7:30am.  My goal was to complete a loop by following the ridge further west, so I began by re-climbing West Bigelow Peak. The sun on my back now felt strong and hot, even before 8am. From here, the ridge descends steeply, winds pleasantly through a fir/birch forest, and then climbs steeply again to the South Horn, a north-south pair of bumps with excellent views.  I’d heard that North Horn, a quarter-mile side trip, was the better of the two so I zipped over there for a snack.  It indeed has a beautiful view along the range, of the broad Flagstaff Lake in the valley, and of the pretty tarn known as Horns Pond just below.

Reluctant to leave, but with miles yet to go, I descended to Horns Pond – another well-run campsite! – and then down the Horns Pond Trail toward my origin. I saw almost nobody, quite the contrast to the busy trail on Saturday, and reached my car just before noon, just under 24h after my departure.

To celebrate this, my first major hike in Maine since December 1987, I stopped for lunch at the popular White Wolf Inn in nearby Stratton.  Highly recommended!

I’ll be back next summer, to tackle an 8-mountain range centered on Sugarloaf Mountain, a range that featured prominently in the southern side of my view this weekend.  Can’t wait!

David Kotz is an outdoor enthusiast, traveller, and father of three. He is also a Professor of Computer Science at Dartmouth College. View all posts by dfkotz