Every year I attend the MobiSys conference; this year it was held in the beautiful Lake District of northwestern England.  I had heard so much about this area – a walker’s paradise, people said – so I decided to go early and to bring along my son John.  We flew from Manchester to Manchester (NH to UK, that is) and drove to Ambleside, in the center of the Lake District.  It was pouring rain, but the rental-car agent assured us that it wouldn’t last (more on that later). 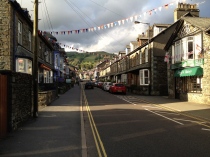 We spent three nights in Ambleside’s Brathay Lodge, exploring this touristy but attractive small town near the shore of Lake Windermere, and the surrounding hills.  It was pouring rain on our arrival Friday afternoon, but Ambleside is full of inviting cafes.

Saturday morning we put on our packs and headed out onto a light rain.  (Are you catching onto the theme here?)  Two days of heavy rain brought floods to parts of England, and the streams around Ambleside were running hard.  We walked up a lane beside one, Stock Ghyll, following it uphill through neighborhoods of vacation cottages.  Soon the trail dived into the woods and we found the impressive Stockghyll Force, a two-level twinned waterfall.  (A pair of waterfalls pour into one pool, whose outlet has a pair of streams that form another pair of waterfalls into the next pool!) [photos]

The rain stopped – paused, would be more accurate – and we continued uphill out of the forest and into pleasant pastures surrounded by stone walls that date back hundreds of years. The meadows were full of yellow wildflowers, and the ewes with their new lambs barely glanced up as we hiked by. We passed treeline – which around here is only 1000′ or so – and the countryside was completely open in all directions. The wind picked up, and as we crested the summit of Wansfell Pike we were blasted with 55mph winds and scraps of low-hanging clouds.  Still, the view was impressive, whetting our appetite for more.  Or more immediately, for lunch.  We returned the way we came, skipping the longer loop recommended by the guidebook, and settled into the Apple Pie Bakery for a warm lunch of savory pies.

Sunday we tackled our most ambitious hike, a blend of the Scandale Pass trek and the Fairfield Horseshoe.  The forecast promised afternoon sun and the morning skies were cloudy but at least they weren’t dripping.  Yet.  Again we climbed up narrow lanes out of Ambleside and through a verdant lowland forest. As soon as we passed High Sweden Bridge – an impressive stone archway over the brook, we were once again in open country. The dirt and gravel lane continued a few miles up the Scandale valley, with drystone walls on both sides. [photos]

I must say, these stone walls are impressive.  Four to six feet high, they are made of local fieldstone, stacked “dry” (without mortar) and yet have in most cases been intact for a hundred years or more. Itinerant crews of “wallers” would roam the hills to build walls for hire; they would build two short walls side-by side, then add a wider “through stone” that rested on both walls, then continue upward, capping the wall with stones standing on end.  In this photo you can see the through-stones sticking out of the wall; they also serve as a handy step for a farmer (or hiker) looking to climb over the wall.

The recent rain made for wet going; tiny rivulets had become small streams, crossing the road.  As we picked our way up the lane, scattered sheep grazed the adjacent pastures.  Beyond, on all sides, we could see the rugged high peaks (‘pikes’) that were today’s target.

Did I mention rain?  The rain returned, on and off, for the next few hours.  We reached the head of the valley and scrambled up to Scandale Pass.  The pass caught a few rays of sun so we stopped for lunch and examined the trail ahead. To our left the trail followed the ridge line to the summit of Dove Crag – the latter name being more descriptive than the former.  Rugged cliffs tore scraps of mist from the low cloud deck.  Blobs of white sheep picked their way across the high-altitude terrain.  Otherwise, gray was the dominant theme: wet granite rocks and rain-filled clouds.

Although I say “high altitude”, that’s a bit of a stretch.  Our highpoint for the day (Dove Crag) reaches only 792m (2,598 feet) above sea level.  But at this latitude (54 degrees north) the terrain here is all above treeline and feels much like the summits of my home territory in New Hampshire’s White Mountains.  Rocks and grasses, a little heather, the occasional shrub.  Just add sheep.

When we reached Dove Crag, the summit winds spitted rain at us.  The low clouds prevented us from seeing northeast to Hart Crag and the Fairfield loop.  We’d had enough, and headed straight for Ambleside, following a long ridgeline from Dove Crag to High Pike then Low Pike and back into the village.  All of this was in open country, following a truly impressive stone wall right on top of the ridge.

As we headed down, away from the high country, the rain stopped – and the sun came out. Wow! what a view.  I had thought the hills beautiful even in the gray clouds and rain.  When the sun comes, and the sailboats head out on Lake Windermere, and the hills turn brilliant green with a glint of sun on the ‘tarns’ and ‘waters’ and ‘lakes’, it is truly spectacular.

We were back in town by 4pm, and ready for a contrast.  We went to see the film Men in Black 3D – now, there’s a contrast! – and a Thai dinner.

Monday we awoke to – you guessed it – rain.  So we decided to spend the morning shopping, and hope the afternoon forecast (“partly sunny”) would be correct.  We drove west, into ever narrower and ever twistier and ever steeper roads and lanes, over Whynose Pass and then over Hardknott Pass. Sometimes the road was so narrow that my side mirrors trimmed the hedges on both sides of the road.  Meeting an oncoming car in such a lane is, well, a bit tricky! [photos]

Our goal was to visit the ruins of the ancient Roman fort on the other side of Hardknott Pass.  It was now early afternoon and the promised sun was, well, still a dream.  We poked around the foundations of the fort, its gates and towers and bathhouses, then decided to climb to an unnamed (?) peak above the fort and beside Hardknott Pass.  Again, it’s all open land, with views for miles, and we picked out our own route through the grass and heather, with sheep munching as we passed by.  The view was impressive, looking down on the fort and behind it to an extensive valley that reaches to the seaside beyond. I can see why the Romans chose this spot for a fort, guarding the pass and with an extensive view over the valley.  Looking right, in the clouds, we could barely pick out the highest point in England, Scafell Pike. My peak-bagging instinct was itching, but the day was late.

We arrived on the summer solstice, here at 54.5 degrees north, so it’s never really “late”.  Sunrise is at 4:15am and sunset at 9:50pm, with more daylight on either side. Wonderful conditions for exceptionally long hikes, so I can see why the guidebook promoted numerous 11- and 16-mile hikes. Today, though, our goal was to reach the hotel in time for dinner.

I dreaded the return trip over the passes and through the narrow road, so we headed onward, downhill toward the western shore.  Unfortunately, the road was just as narrow, and the way confusing, so we got a bit lost.  But the sun came out!  why does the sun always wait until we’re off the trail?  We drove the long way ’round, alongside the seashore, stopping at Muncaster Castle, and then weaving among the farms and pastures back to Lake Windermere.

Tuesday and Wednesday we spent at the conference, with little to report here.  We stayed at Low Wood Bay, a grand hotel on the shore of Lake Windermere.  The sun disappeared as we arrived, so John’s hopes of swimming and kayaking and sailing didn’t materialize. [photos]

Thursday we left after lunch, in a thunderstorm with (yes!) pouring rain, for the drive back to Manchester. We met friends for dinner and a stroll in the Rusholme district, famous for its Indian and middle-eastern food.  Highly recommended!  We ate at the Shere Khan, quite tasty Indian food.

Friday we sought out my birthplace.  Yes, I was born here (an area called Ashton-upon-Mersey, in Sale, a suburb of Manchester) when my parents were visiting for a postdoctoral position. The “nursing home” where I was born is now an old-folks’ home. [photos]

And, we drove west to Chester, again near the coast, to explore the ruins of a Roman amphitheater and the fortified walls that once protected the city. Lovely place, very nice shopping district in the center of town. [photos] Rain?  Yes! just a shower, along the drive there, but Chester offered only clouds.

There it is then.  We had a great time – hiking the fells, exploring the villages, eating great food (Indian, Thai, Lebanese, and yes even the English food).  I’d love to go back.

PS. My reviews of hotels and restaurants are on TripAdvisor.

One thought on “A week in the Lake District of England”