When hiking in the mountains one must occasionally have faith in the weather – starting out enmeshed in dense valley fog, only to climb into a spectacular day above the clouds.  This was one of those rare, magical days, when we topped a ridgeline and encountered a mountain view more spectacular than any I have seen in 45 years of hiking, with the major peaks of the Berneralps spread across the horizon above a sea of undercast clouds.  Breathtaking!   Read on for the full story, and be sure to check out the photo gallery.

During my sabbatical year in Switzerland I am hosted by a research center (CDHI) at ETH Zürich; last week, when the students invited me to join their annual group outing, I almost declined – I am facing a major grant deadline – but the opportunity seemed too good to pass up.  Little did I realize how good.

We set off for this two-day trip early on Thursday morning on a series of three trains, the first packed with commuters on their way to Bern and the last packed with tourists on a century-old cog railway from Interlocken up to Schynige Platte.  The glossy brochures advertised beautiful scenery as the train hugged the valley walls and climbed to a tiny station at 1967m (6453’).  For us, though, it was a quick climb into the clouds, and we disembarked into a thick fog that made it difficult to find and follow the trail signs.  We had a ten-mile hike ahead of us, entirely above tree-line… but it seemed we might not see much more than our feet in front of us.

Our group nonetheless headed off in high spirits, aiming to climb to the peak of Faulhorn and then down to a ski hotel at ‘First’, above the valley town of Grindelwald.   The group comprised about a dozen CDHI graduate students, originating from across Europe and beyond.  The white-red-white trail followed an easy contour, navigating ridgelines and minor outcroppings barely visible in the fog above.  Occasionally a patch of blue sky would peek through.  At a junction we turned uphill and, after a short climb, popped out into the sunshine.  Wow!  Here, hovering at the edge of the undercast, we could see some of the neighboring peaks, their white glaciers gleaming in the midday sun.  It was exciting, and I popped off a hundred photographs… but it was only a sampling of what was yet to come. 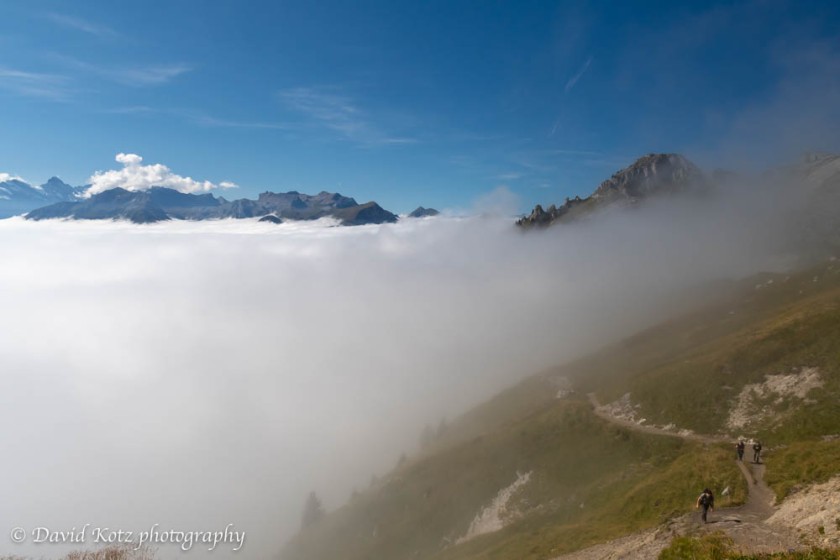 We paused for lunch in a grassy alpine valley echoing with the bells of cows grazing below, then rounded the ridgeline to climb a rocky valley to a minor pass with a tiny Berghotel.  It is amazing to me that one can climb to 2344m (7690’) in the mountains and stop in for a beer and a wurst before heading onward. 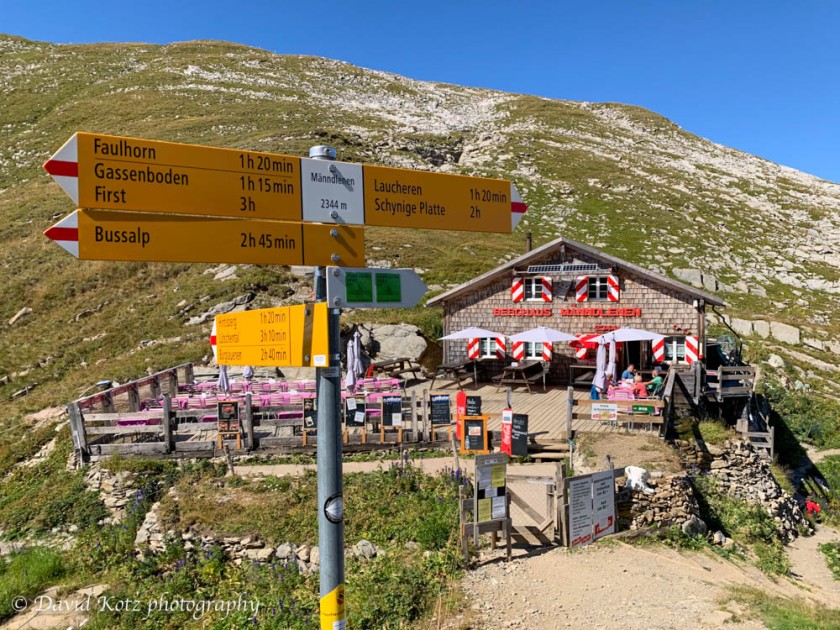 From here we followed the contour along a major shoulder of Faulhorn – now visible, with what appeared to be a telecommunications antenna on top.  As we approached the ridgeline, and passed over its top, we stopped in awe of the view ahead.  Here, spread in front of us and appearing to float in a sea of undercast, were arrayed the major peaks of the Berneralps – the Alps of the Bern region – with the famed triplet of Eiger, Mönch, and Jungfrau at the center.  The mountains’ jagged peaks were crisply visible in the crystal-clear sky above the undercast; the afternoon sun descended to our right, casting a beautiful light on the scene.

Faulhorn loomed to our left, and we slowly climbed the final switchbacks to its steep 2681m (8796’) summit. Its peak is steep on all sides – with a sheer cliff on its north side – so it was astonishing to see a hotel perched atop its summit! 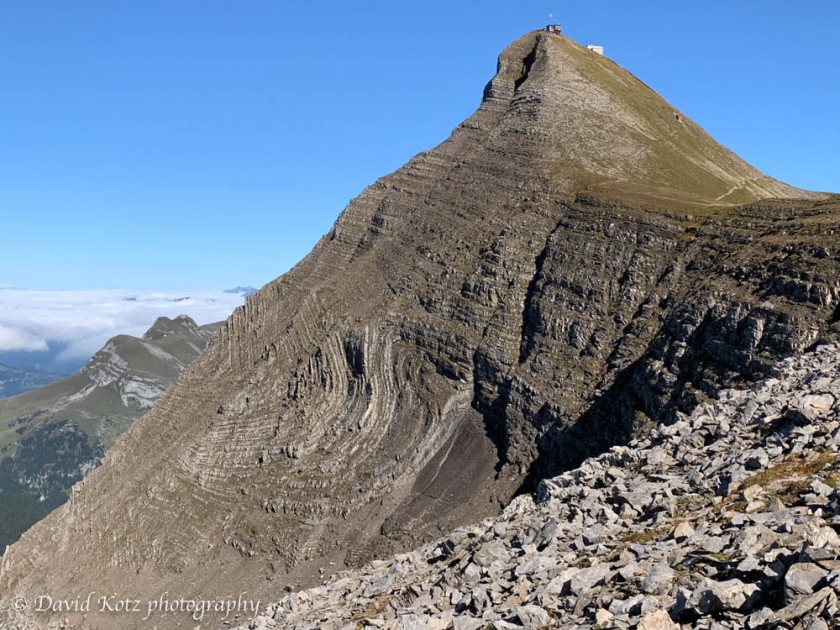 I arrived to find the rest of the group settled around a sunny table on the patio at the summit hotel, enjoying a round of beers.  What a day! 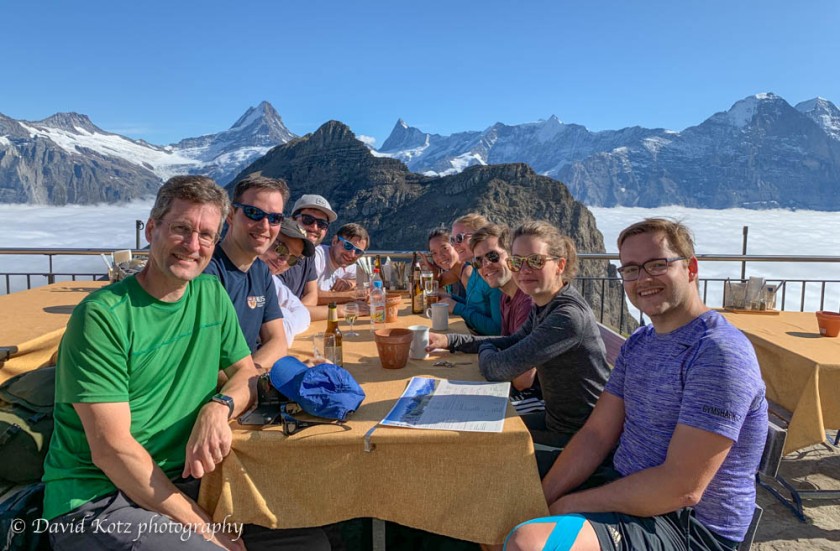 The original plan had been to stay at this hotel, but logistics prevented some members from attending the hike so plans had shifted to the hotel at the end of the hike, halfway down into the valley toward Grindelwald.  I was so overcome by the magic of the panorama, however, that I asked to stay the night.  Two others joined me, giving us the opportunity to enjoy a hearty mountaintop dinner before watching peaks turn from yellow to orange to pink as sun slowly set above the overcast far to the west.

After a comfy night in this historic alpine hotel (there are only two older mountain-top hotels in Switzerland) – each snuggled under a down comforter in a bunkroom that sleeps 32 tired hikers – we rose early to catch the sunrise.   The undercast was entirely gone, giving us a clear view of the valley and – surprise! – foothills we hadn’t even known were there the night before.  After a breakfast of Swiss cheeses, muesli, bread, jam, and tea, we packed up and strolled down the valley toward First.  Walking down through green pastures on a sunny clear day, past clear alpine tarns and grazing cows, with the Alps spread across our horizon, was for me another incredible experience.

We encountered the first wave of tourists about one kilometer from First, which is essentially a ski lodge at the top of a gondola above Grindelwald.  Here we met up with the rest of our group, and (amongst the many other tourists) zipped down the zipline and soared along the ‘flying eagle’ zipline.  Quite a rush!  I opted to ride down the gondola while others rode mini-scooters down the windy road.  It was then a short walk through the touristy streets of Grindelwald to the bahnhof and our train homeward. 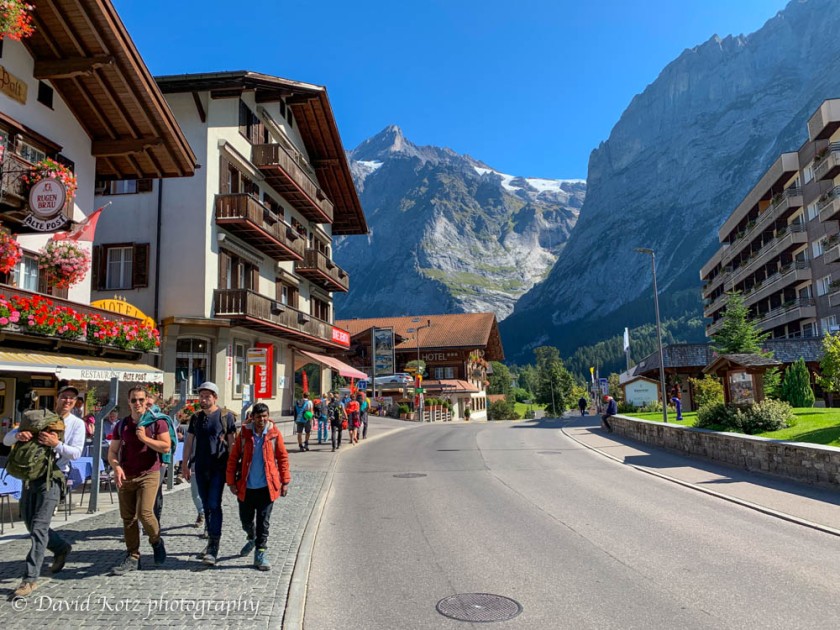 I have had the good fortune to hike in the mountains of New York and New England for over 45 years, and in some beautiful locations across the country and around the world – including Mount Kilimanjaro, just three years ago – but I have never before been so moved by the scenery.   While standing atop Faulhorn, I felt like I was in a dream.  So incredible.  So unbelievable.  So lucky to be here, this day, this place. Wow.

The photos here are just a sample – some of my favorites are only in the gallery. 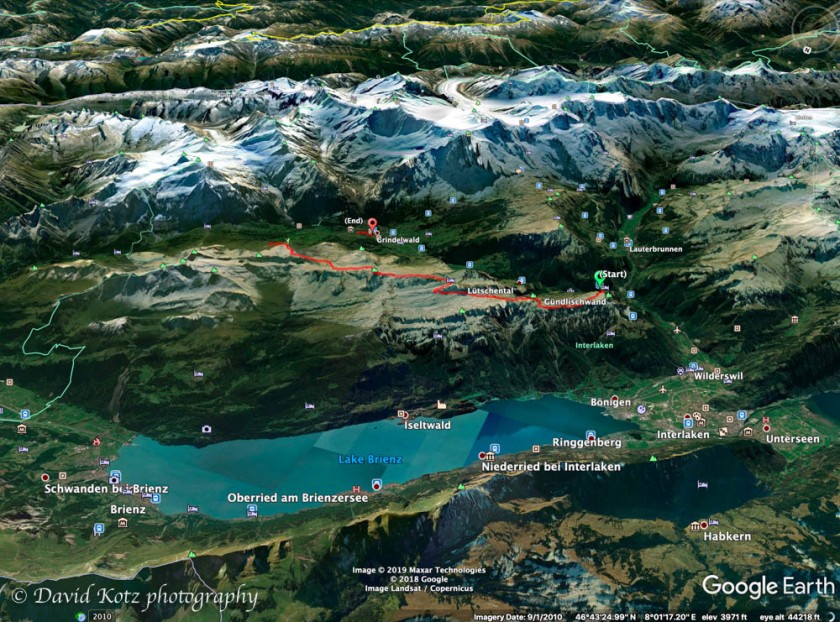