The weather thus far in Switzerland has been spectacular – blue skies, warm temps, low humidity.  And this day, for my first hike, the weather truly delivered in top form.  I joined a group organized by D-MTEC, the Department of Management, Technology, and Economics, which is the ETH department where I sit during this year in Zürich.  The hike to circumnavigate a small peak named Gandstock was moderate in length and difficulty, covering 11.5 km (7.14 mi) in 4h55 at altitude ranging from 1610m (~5,280′) to 2167m (~7,110′), all of it above treeline.  Check out the photo gallery, and read on beyond the break.

One of the cool things about hiking in Switzerland is that you can take the public transport system, which is one integrated nationwide system, directly to many beautiful trailheads. When I read that we should “meet at the big clock in the Hautbahnhof”, the main train station, I was unsure whether I could find it.  Not to worry: it is obvious, and indeed there were many other groups using it as a meeting point.  I thought it might be easy to identify the MTEC group, because they would be the ones carrying daypacks and trekking poles.  But so were all the other groups; indeed, the train was packed with other hikers of all ages.  This is Switzerland!

We stepped off the train about 90 minutes later in the small town of Schwenden, intending to catch a bus up the valley to the end of the road at Kies.  Unfortunately, so did several hundred other hikers, and the bus could fit perhaps fifty.  Our trip leader had made a reservation for this bus, but apparently so did several of the other groups.  The reservation does not give priority, but it is supposed to inform the system that extra buses may be needed; that word did not reach the bus drivers!  Fortunately, the drivers worked something out and another bus came by about 20 minutes later to take the overflow up to Kies.

After winding its way up a narrow mountain road, we reached the end of the road at Kies. Not a village, or even a hamlet, Kies is really just the base of the Seilbahn (cable car) that takes one up even further to Mettmen.  We bought our tickets and rested in the morning sunshine while the two cable cars shuttled hikers up and down.  Once at the top, the view was already spectacular!  Here there is a lovely hotel and restaurant, and the starting point for our hike.  We strolled around the edge of the Stausee Garichti reservoir, and began our climb up to Gandstock.

At this point the trail led mostly through open meadows, with the occasional shrub or tree dotting the landscape.  A nearby dairy farm uses these alpine meadows for summer grazing, so the hillsides sometimes looked terraced by the cows’ tendency to follow the contours.  Once we ascended a few hundred meters, we did the same, following a trail up and down as it circumnavigated the stony peaks of Gandstock.

We followed a white-blue-white trail north along the west side, then a white-red-white trail south along the east side, cresting a high pass before descending to our starting point.  In the incredibly organized Swiss trail system, yellow trails are easy “hiking trails” suitable for anyone, white-red-white trails are moderate “mountain trails” suitable for better hikers, and white-blue-white trails are rugged “alpine routes” that require a bit more care and skill.  Our northbound trail used to be red, but had been relocated and reclassified as blue due to some loose fields of scree.  Some in our group were nervous in a few spots that were especially loose or wet.

But the group was cheerful and friendly, the views spectacular, and the meadows full of ripe blueberries. What’s not to like?  We reached the northern end of our loop and turned south up the east side of Gandstock, with new views to the east.  Now we were on a red trail and the going was easier, but then we had to climb to the top of the pass and over the southern shoulder of Gandstock.  Nestled in this pass is a lovely little tarn called Berglimattsee, and a grassy meadow providing impressive views to the south and west. The photo at top of this post is a panorama from that spot; below was an opportunity to reflect some of the nearby Alps in Berglimattsee. 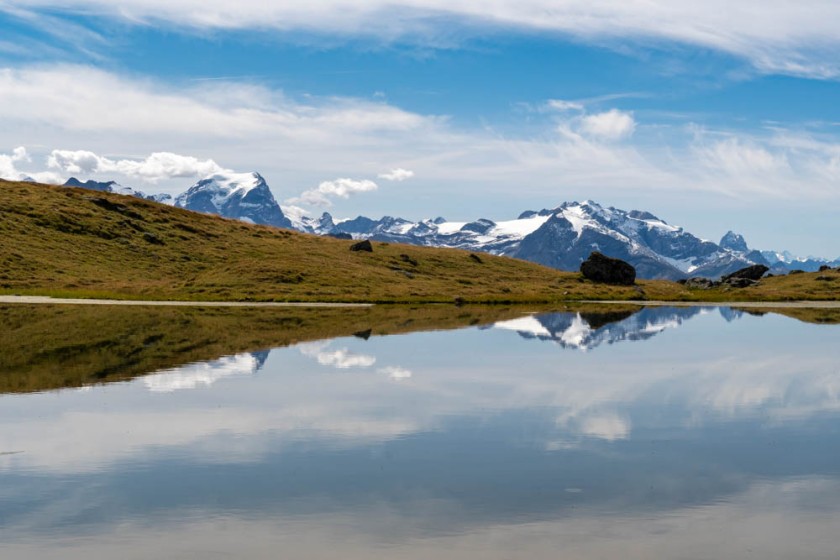 After a sunny lunch with bread, cheese, sausage, and apples, we descended down the west side of the pass to our starting point, where we caught the Seilbahn down to Kies, the bus back to Schwenden, and the train back to Zürich. Eight hours altogether. Quite a lovely outing!  More photos in the gallery.

Overview map of the area. Our hike is located near the glare spot at top left.

D-MTEC hike around Gandstock. Note the gondola (seilbahn) symbol at lower right, which we took to our hike starting point. The peaks at top (south) dominated our view.

David Kotz is an outdoor enthusiast, traveller, and father of three. He is also a Professor of Computer Science at Dartmouth College. View all posts by dfkotz

One thought on “Gandstock hike”