We have completed the entire journey of the river through New Hampshire and Vermont!

For the past six years we have been canoeing sections of the Connecticut River from its source at the New Hampshire-Canada border toward its mouth on Long Island Sound.  Each year we pick up where we left off the previously – so this year we launched our canoes just below Bellows Falls, and paddled three days to the first take-out inside Massachusetts. As a result, we have completed the entire journey of the river through New Hampshire and Vermont!  We’ve been fortunate to follow the string of campsites organized by the Connecticut River Paddlers’ Trail and their excellent map.  This year we paddled through a beautiful section of river, with good weather, albeit with some strong headwinds. We passed the Vermont Yankee nuclear power plant (now being decommissioned), and the city of Brattleboro, and portaged around Vernon Dam.

As we have every year, we saw several bald eagles – this year, on both Saturday and Sunday, both mature and immature eagles.  We also saw blue herons, green herons, cormorants, loons, kingfishers, and a variety of ducks.  Most interestingly, we saw numerous gray squirrels swimming from New Hampshire to Vermont.  Amazing!  We saw at least 14 squirrels (three of which turned around when they encountered us) swimming from NH to VT and, oddly, none swimming from VT to NH.  Maybe the acorns taste better in Vermont?

On our second night, our sleep was interrupted by the loud cries of an owl, directly overhead.  Indeed, I believe the commotion began with the cries of another animal, caught by the owl… then a flutter of wings while the owl rose to a tree overhead, and then the song of the owl bragging about its successful meal.  whooo cooks for you? who cooks for you allll…?

This year we started at a car-top access point (mile 172) and pulled out at a boat ramp (mile 132), staying at the Windyhurst and Wantastiquet Campsites.  Very nice!  Just a few more photos: 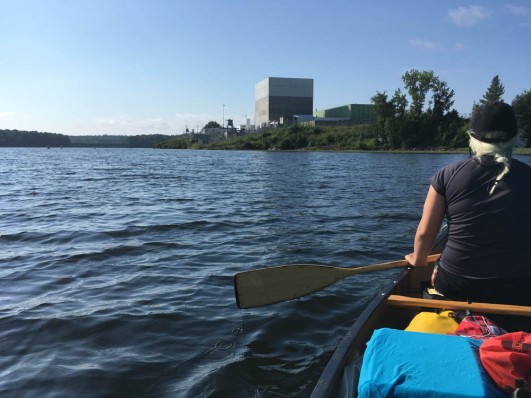 Pam and Andy on our annual canoe trip.