A beautiful hike up Mount Washington, near the summer solstice. 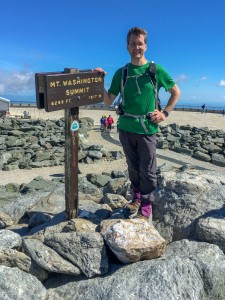 After a busy spring term at Dartmouth I decided to take advantage of clear skies and a clear calendar to hike Mount Washington.  As I drove to the mountains, I could see that every mountain in New Hampshire was in the clear… except one.  A persistent cloud snuggled the summit of Mount Washington.  I headed up the Ammonoosuc Ravine Trail at 7:15am, and intermittent views ahead confirmed this cloud was stuck on the summit. Still, the trail passes many beautiful waterfalls and rocky formations, and I saw only one other hiker in the early morning chill.  I reached Lakes of the Clouds, and the AMC hut, in brilliant morning sunshine.

Fortunately, as I scrambled up into the cloud, it dissipated, and I reached the summit at 10am under sunny skies.  After exploring there for a while, I headed toward the northern Presies (Clay, Jefferson, Adams, Madison), to each of which still clung small patches of snow.  I hopped over the Cog Railway tracks, skirted Clay to the west, and dropped down the Jewell Trail to my starting point.  [It’s amazing how pleasant the Jewell Trail can be in good conditions – i.e., when it’s not dark, 30 degrees and raining, postholing through an ice crust; but that’s another story.]