I awoke at dawn, despite seven hours of jetlag, to the sounds of the morning call to prayer at a nearby mosque and to the pre-sunrise chorus of birds in the surrounding trees.  These sounds – and the mosquito netting hanging from the four-posted bed in this B&B cottage – quickly reminded me of our late-night arrival in East Africa. Barely three degrees south of the equator, and nearly in sight of Mount Kilimanjaro, we were nestled into the delightfully lush greenery of the RiverTrees Hotel outside Arusha, Tanzania. Today would begin our ten-person ten-day family safari with Thomson Safaris. Four of us had taken very nearly the same trip 18 years earlier, and were now back with the next generation along for the ride. The weather was dry and slightly cool and our aim for the day was to explore the highlands of Arusha National Park in the foothills of Mount Meru, one of several volcanic neighbors of Kilimanjaro.

Our two guides – Robert and Freddy – have over 30 years of safari guiding experience between them. I came to deeply appreciate their expertise, their patience in answering all of our newbie questions and letting us stop and watch every animal, their friendly demeanor, and the way they mixed a calm and professional attitude with a laid-back friendly sense of companionship. After Robert walked us through some “do’s” and “don’ts” regarding safety, and taught us some travel essentials – as a photographer, I took particular note of the phrase simama for “please stop the car”. We later learned that simama was also a great excuse to “check the tires”, a.k.a., to walk behind the car for a little private time to, um, water the dusty roadside brush.

Packed comfortably into two customized Land Rover 4×4 vehicles, we headed up to Arusha National Park, and were immediately treated to a view of an elephant family. Although 100m distant, we were excited to see them; little did we realize how close we would get to so many elephants in the coming days. We cruised slowly past meadows of grazing zebra, giraffes, baboons, and warthogs; we peered through the tree cover at vervet monkeys and colobus monkeys; we paused along the shores of the Momella lakes to marvel at the birdlife.  These shores were, quite literally, carpeted with pink flamingos, with cranes and goose and herons sprinkled here and there.

After 20+ hours on airplanes to get to Tanzania I was pleased that today’s activity included a walk.  We strolled cautiously through a meadow, taking care not to startle the surrounding cape buffalo or to step in what they’d left in the grass.  As we approached the treeline on the far edge of the meadow, we watched a group of giraffes stripping leaves from the acacia trees.  Only 30m form us, they seemed as curious about us as we about them.  We turned and headed briefly into the woods to visit a beautiful waterfall, a sizable stream of water draining the high slopes of Mount Meru.

Our short first day ended with some quiet time back at the hotel – a chance for the kids to splash about in the chilly swimming pool before a lovely dinner in the open-air restaurant.

After another sumptuous buffet breakfast, Day 2 began with a visit to the Cultural Center in downtown Arusha.  Although the centerpiece is a stunning gallery of African art, both traditional and contemporary, set in a new building that is itself an architectural piece of art, the main attraction is clearly the gift shop. Busy with tourists, and salespeople who assured of us of ‘special prices’, we explored their collection of traditional handicrafts while Pam investigated the tanzanite gems.  Tanzanite is a unique and beautiful gemstone mineral, found only in Tanzania and indeed only in one mine, a few miles away.

After escaping Arusha traffic we zipped westward along a well-paved road, passing numerous Maasai boys tending to their herds of cows, goats, or sheep grazing along the roadside.  Twice we passed small groups of boys, dressed all in black and with white paint on their faces reminding me of walking skeletons. I learned that these boys were engaged in their three-month transition to manhood, which culminates with circumcision and becoming a warrior. (We’ll return to that tradition on Day 9.)  At lunch we arrived at the entrance to Tarangire National Park.

More in the next post!  and don’t miss the full SmugMug photo collection.

The following map shows the northern region of Tanzania and all the locations visited on our safari: 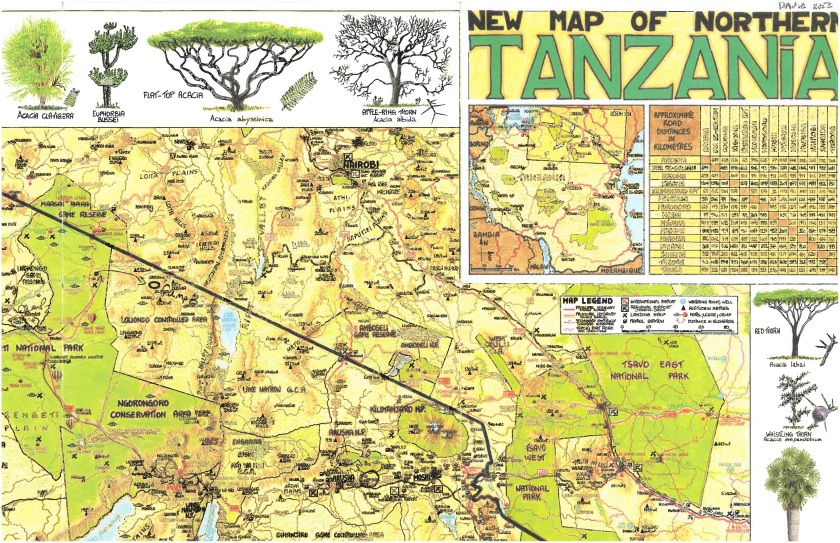 One thought on “Tanzania safari”