Even in the richest country in the world, there are homeless people.

We live in a rented flat on the edge of the richest neighborhood (Oberstrass) in the richest city (Zürich) in the richest country in the world (Switzerland).  Everything is neat and orderly.  The Swiss run the country like the clockwork for which they are duly famous. And the social safety net is strong, as I’ve heard from Swiss colleagues who have explained the systems for education, healthcare, disability, retirement, and unemployment.  Even in the tiny rural villages through which I’ve hiked, the homes are tidy and the farms are clean and organized.

Nonetheless, there are homeless people in Switzerland.

Indeed, when the international aid organization Doctors Without Borders recently set up field hospitals near Geneva, one of their explicit goals was to support the homeless. “Between 3,000 to 5,000 homeless people and at-risk migrants are believed to live in the canton of Geneva”, according to an article in TheLocal. As the organization noted, “people living in overcrowded conditions, on the streets, in makeshift camps or in substandard housing are at particular risk (from the corona virus)”.

Those numbers surprised me, because until recently I held the illusion that there were no homeless people in Switzerland.  Indeed, at least two Swiss colleagues in my office told me, independently, how shocked they were when they went to a meeting in California and found the streets littered with homeless people. Such sights were totally unfamiliar to them, and also surprising. They expected to see such things in third-world countries, they said, but not in the purportedly great United States. (Sadly, as we from the U.S. know all too well, America does an embarrassingly poor job assisting its homeless.)

In recent months, however, I’ve noticed two homeless people in the heart of Zürich.  I recently walked down Bahnhofstrasse, reputedly the most expensive retail real estate in the world (perhaps second only to New York’s Fifth Avenue), normally bustling with shoppers but deserted on this corona-tinged Saturday morning.  There, in the entryway for Läderach chocolate (closed, like all the other shops on Bahnhofstrasse) was a person sleeping, bundled against the cold – likely the same homeless man I’d seen on this block well before the corona situation. The contrast was stark, between this poor fellow and this high-end chocolatier targeting the 1% of chocolate shoppers.  It made me wonder about those vaunted Swiss systems for assisting such people, and how this fellow slipped through the cracks. 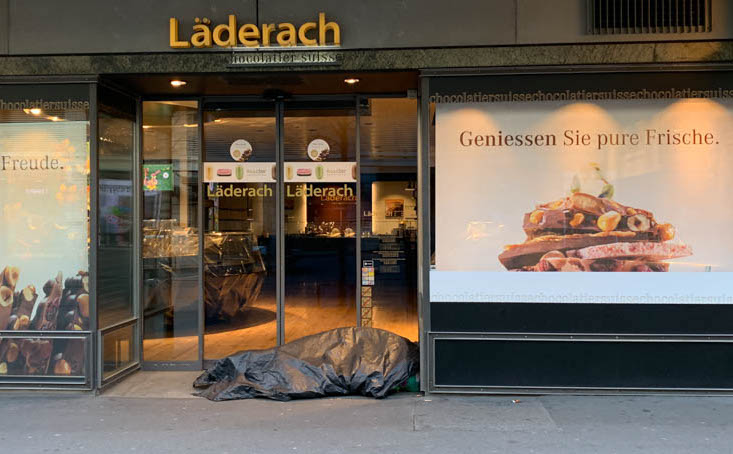 For the past two weeks I’ve encountered an older man at the edge of the woods, where the posh Oberstrass neighborhood meets the hilltop forest. Each time I see him, early in the morning, he is carrying a bedroll and some bags of provisions, and appears to be on the move.  Today, it appears he is camping at a popular picnic spot; as I passed this morning, his overnight fire was still smoldering next to his cookpot and other provisions.

Anyway, I am generally impressed by the Swiss and by Switzerland, yet remain curious how they address the challenge of tending to the most needy, especially in times of crisis.

2 thoughts on “Homeless in Switzerland”