A daytrip to Bern to stroll the old town, climb the cathedral tower, and visit the Einstein museum.

Pam, Andy, and I bought ‘GA’ cards for the past holiday month, giving us free rides anytime, anywhere the Swiss rail system (and local bus/tram systems) go. What a treat! With only four days left on our cards, Pam and I decided to make the most of them. Each day we asked, “where would you like to have lunch today? Anywhere in Switzerland. Anywhere.”  Today we picked Bern, the capital city, only an hour from Zürich by express train.  Read on, and check out the gallery.

It was a cool but sunny day, so we strolled through the streets of old town (itself a UNESCO World Heritage Site), wandered the stalls at the farmers’ market, explored the grand cathedral, and visited the Einstein museum. I was particularly interested in climbing the tower at the cathedral, Berner Münster, because it has a gorgeous view and because it is the tallest such tower in Switzerland.  (Above you see its shadow extending north across Bern’s old town.) It also houses the biggest bell in Switzerland; weighing over 10 tons, I wonder how they managed to get it up that high.  The tower is delightfully interesting, in gothic style, with carved figures high on its ramparts… I wondered whether those were patrons, or perhaps figures representative of various guilds.

The Einstein museum is totally worthwhile; it does a lovely job of presenting the man, his ideas, his family, and the global context in which he lived.  I was especially interested in his time as a student, and later as a professor, at ETH Zürich.  They actually have his report card – low grades indicating his poor attendance at many classes – and his c.v., which comprises less than half a page.  You can even sit with Einstein out front. 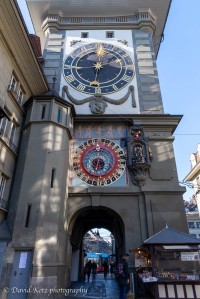 We walked under the Zytglogge, an 800-year-old tower that used to be a watchtower on the outer wall of Bern – until the city grew and they built a new wall farther out, then again when they built a new wall still further out. It became a prison, and then a clock tower, whence its name.  It has a fascinating antique astronomical clock, and an animated, musical movement that includes a crowing rooster, a whirling set of figures, and a jester.  We watched it enact some movements as the time turned 2pm, but were underwhelmed. Perhaps more happens at noon.  But I’m awestruck that this tower’s bell has been ringing the hours, every hour, for over six-hundred years.  (The bell was cast in 1405 and has remained unchanged since.)

The city has more than 100 public water fountains, all drinkable water, and most elaborately decorated.   They have a fascinating history.

We ate lunch at Namamen, a specialty ramen shop near the train station, because Andy is a big fan fan of ramen.  We had mixed opinions of the ramen, and despite the Lonely Planet’s characterization that it is cheap, it cost us three almost a hundred bucks.  Welcome to Switzerland.

Check out the gallery for more photos! If you want to track our adventures, Follow us by RSS or email at the upper-right.