An exploration of the ruins of historic Vijayanagara civilization, once one of the largest and richest cities in the world.

On my very first visit to India in 2007 I learned about an amazing historic site called Hampi.  Although we lived in Bangalore for much of the following year, and Hampi is in the same state, we never managed to find the time for a visit.  (Even today, with a new four-lane highway almost completed, it is a 6-8 hour drive from Bangalore to Hampi.)  So I’ve kept it on my mental to-do list.  And now, it seems, the New York Times has listed it as #2 on its list of “52 places to go in 2019”.

Last week I was in Bangalore to speak at a conference, and next week I need to be in Hong Kong to visit a university, so I had this weekend free.  I finally had my chance to visit Hampi!   I spent two and a half days exploring this incredible place.  Read on, and check out the photo gallery. 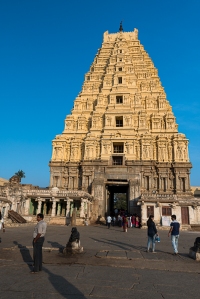 According to Wikipedia, “Hampi … is a UNESCO World Heritage Site located in east-central Karnataka, India.” Although there is evidence of civilizations here dating back to the third century BCE, and some temples still standing from the 9th century CE, its major peak was in the 14th-16th centuries CE. “It became the centre of the Hindu Vijayanagara Empire capital in the 14th century. Chronicles left by Persian and European travellers, particularly the Portuguese, state Hampi was a prosperous, wealthy and grand city near the Tungabhadra River, with numerous temples, farms and trading markets. By 1500 CE, Hampi-Vijayanagara was the world’s second-largest medieval-era city after Beijing, and probably India’s richest at that time, attracting traders from Persia and Portugal. The Vijayanagara Empire was defeated by a coalition of Muslim sultanates; its capital was conquered, pillaged and destroyed by sultanate armies in 1565, after which Hampi remained in ruins.”  Hampi includes “more than 1,600 surviving remains of the last great Hindu kingdom in South India that includes ‘forts, riverside features, royal and sacred complexes, temples, shrines, pillared halls, mandapas, memorial structures, water structures and others’”.

After endless frustration attempting to book a ticket for the overnight sleeper train (on a clunky website that won’t accept non-Indian credit cards) and after deciding not to risk the flaky airline that now flies one Bangalore-Hampi round-trip per day, I arranged with the Hampi resort hotel to have them send a car to pick me up after the conference and later to return me to the Bangalore airport for my flight to Hong Kong.  That plan worked well, but riding through traffic in India can be a hair-raising experience.  It took eight exhausting hours to reach the resort, and 6.5 hours to return to the airport.

The Vijayshree resort was comfortable and is spread across many luscious acres with green lawns and beautiful plantings. (Two days after my departure they were hosting a wedding with 1500 guests!)   For me, the staff arranged a local guide to show me around the historic ruins of Hampi, using the same car and driver. We explored 9 hours on Saturday, 7 hours on Sunday, and 4 hours on Monday.

The terrain is mostly dry, with little vegetation, scattered with mounds and hillocks of weathered boulders.  The underlying bedrock is granite, which the Vijayanagara emperors quarried to build their many temples and monuments.  (Indeed, the rock is still quarried today, by hand, in nearly the same way… using hammers, chisels, water, and fire.)   One can thus see a lot from the road, and there are many hilltop temples that offer panoramic views.

It would require too much ink to describe everything I visited, but here is a summary.

Saturday: We focused on a set of three sites linked to an entry pass I had to purchase, and which was good for only one day.  We walked the vast Vitthala temple and market complex, had lunch in town, visited the government archaeological museum, the Queen’s Bath, the Royal Enclosure, the Hazara Rama temple, the Zanana enclosure, the Lotus Mahal, the Elephant stables, the Krishna Temple, stopped for chai at a roadside stand, the Ugra Narasimha and Badavalinga Temple, then climbed Hemakuta hill for a view of the sunset among a cluster of temples dating to 9th-11th CE.  Every site was busy with tourists from India and abroad, including many school groups.  (The state government provides free transportation & lodging for all public-school groups.)  Finally, as darkness set in, we stopped at Saraswati Temple so I could try some light-painting for Greenlighting Day in honor of Dartmouth’s 250th anniversary celebration. Saraswati is the Hindu goddess of knowledge, music, art, wisdom, and learning, so it seemed appropriate!  Dinner at the resort was a traditional Rajasthani thali.  Long day!

Sunday: We left the hotel at 5:30am so we could catch sunrise from Anjeyanadri Hill, which requires a climb of 575 steps (yes, they counted, and indeed, there is a number painted every 50 steps or so).  Purported to be the birthplace of Hanuman, the monkey god, the hill is topped by a white-washed temple, making this site both picturesque and easy to spot from afar.  We made it up quickly, with time to spare.  There was a pleasant breeze and a steadily increasing number of other tourists arriving for the view.  One of the monks emerged from the temple to begin his morning routine.  The sunrise was pretty, though not amazing, and we headed back down as other pilgrims, mostly elders from other parts of India, were ascending to worship at the temple.

We drove through the valley on the backside of this hill, through the lush rice paddies of the Anegundi valley, past the lake/reservoir, through several small villages, and stopped at a rock quarry.  As I noted, they still quarry the rock by hand, extracting chunks about 2’ wide by 12’ long by 6” thick.  Most of the workmen wore flipflops and used only hand tools.  One group built a small fire on the surface of the rock, which caused the rock to crack about 6” below the surface. Other holes had been chiseled to create a line, which then became a fracture line as the piece was pried up with rock bars.  Ten men would then gather to lift each piece high above their heads and onto a waiting truck.  Amazing.

We then returned to the Vitthala temple and market complex, where we walked around the side of the temple to reach the banks of the Tungabhadra River.  We clambered along the boulder-strewn shore for about a kilometer, stopping to inspect the many carvings on the rocks and small shrines tucked under or between them.  All of this floods during the monsoon, every year, so it’s amazing it’s intact and accessible after 500 years.

We walked through the Achyutaraya temple and market complex,  and out toward the Virupaksha bazaar.  Back to the hotel for lunch and a nap, then off again for more sightseeing.  The focus of the afternoon was the Virupaksha temple, still an active and bustling site for worship.   There I met Laxmi, the temple elephant, to receive her blessing.  We then stopped for sunset at the Malyavanta Raghunatha Temple.

Monday: I really wanted to go back to the Anegundi valley, which had been so beautiful in the morning light yesterday, so I managed (through two translators) to get the driver to take me back.  I snapped photos of the rice paddies, birds, and farmers in the fields.  We then stopped at two small temples, the Laxshmi temple at Pampa Sarovar and a Durga temple, for a quick look around.  Finally, back in the center of town, I climbed to the top of Matanga Hill for a stunning 360 view of the whole Hampi area and everything I’d seen these past few days.

After a return to the hotel to pack and have a quick lunch, the driver and I headed back to Bangalore.  This time, despite heavy traffic and at least one traffic jam, we arrived in 6.5 hours.  My flight was delayed so I then had to wait seven hours until boarding for Hong Kong at 3am.  Whew.  Long weekend!

Read more about Hampi in Wikipedia, and check out my photo gallery.  I hope the photos capture a hint of the grandeur of this once-thriving city, and some of the people and villages we encountered.  The thing about India, however, are the incredible sights, sounds, smells, and experiences that are never captured on camera… the roadside scenes of everyday life.  Vendors in tiny stalls, uniformed schoolchildren walking to school, bullock carts with loads of sugar cane, farmers squatting at the roadside, mothers teaching daughters to form a Rangoli at the entrance to their home, elderly men reading the morning newspaper, auto rickshaws, motorbikes, huge cargo trucks, dung drying in the sunshine, dogs, goats, chickens, sheep, pigs, cows, bullocks, monkeys, and more.

One thought on “Hampi, India”