I usually get to altitude by climbing mountains, but yesterday I had the incredible opportunity to fly around the Seattle area with my former student Jon Howell 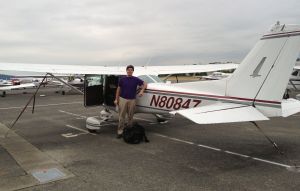 , who now has his pilot’s license and loves to fly. After crawling through Bellevue rush hour we arrived at the Renton airport and went through pre-flight checks on the little Cessna Skyhawk II. The plan was to fly up to Friday Harbor in the San Juan islands, for dinner, but the clouds meant he would need to fly IFR (instrument) rather than VFR (visual) rules. Jon is qualified for IFR but there one of the lights was out and there were reports of something flaky in one radio… discretion being the better part of valor, we instead took a VFR spin around Seattle under the cloud deck, cruising at 1500′. Quite exciting! Nice views of the city and lakes and sound. We even flew right over SeaTac airport while jetliners landed below us. Wow. Check out the photo gallery.

And for dessert, we picked big juicy blackberries along the access road.