A statue of Alfred Escher is a pivot point at the heart of Zürich.

As noted in my earlier post, Zürich is a city of fountains – decorative, commemorative, and functional.  I’ve found very few that commemorate a particular person, or event – unlike what I’ve seen in other cities across the US and Europe.

One notable exception is the statue of Alfred Escher in front of the main train station (Hauptbahnhof) and facing down the city’s central boulevard, Bahnhofstrasse.  Escher, according to Wikipedia, “had an unmatched influence on Switzerland’s political and economic development in the 19th century.”  He had a major role in the establishment of the rail system in Switzerland, as well as the formation of the university now known as ETH, in which I now am a visiting member of the faculty.  Not to mention establishing the banking powerhouse now known as Credit Suisse.  I can certainly understand why he stands at this prominent location in the heart of Zürich!

I photographed this impressive and elaborate statue/fountain in the quiet early hours of Easter morning, with the tulips blooming in the adjacent garden.  Unfortunately, extensive construction on the Hauptbahnhof building behind him, and some of the buildings on the opposite side of the square, make for a cluttered background and limited options for viewing angles.  I hope I’ve captured some of its essence, and its fascinating collection of heroic figures and gargoyles; more photos are in the Zürich fountains’ gallery beginning here. 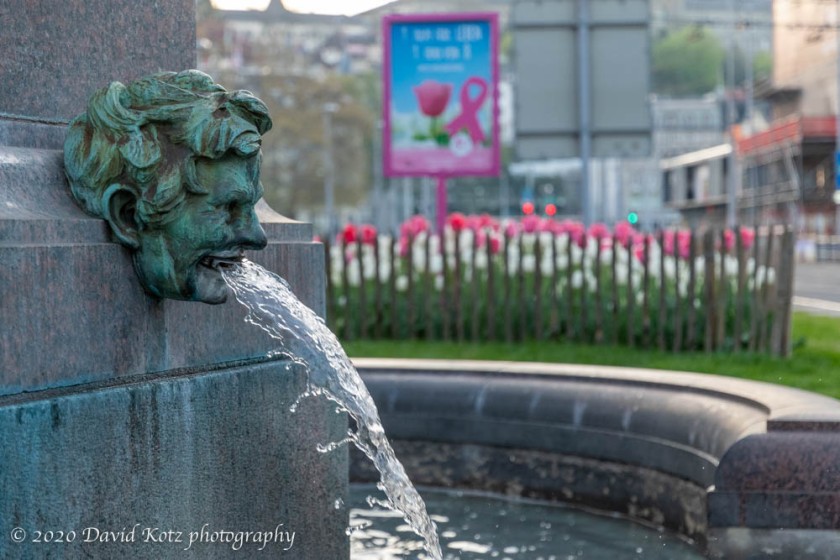